> THE MAN. PATHOS AND EVERYDAY LIFE

THE MAN. PATHOS AND EVERYDAY LIFE

THE MAN. PATHOS AND EVERYDAY LIFE 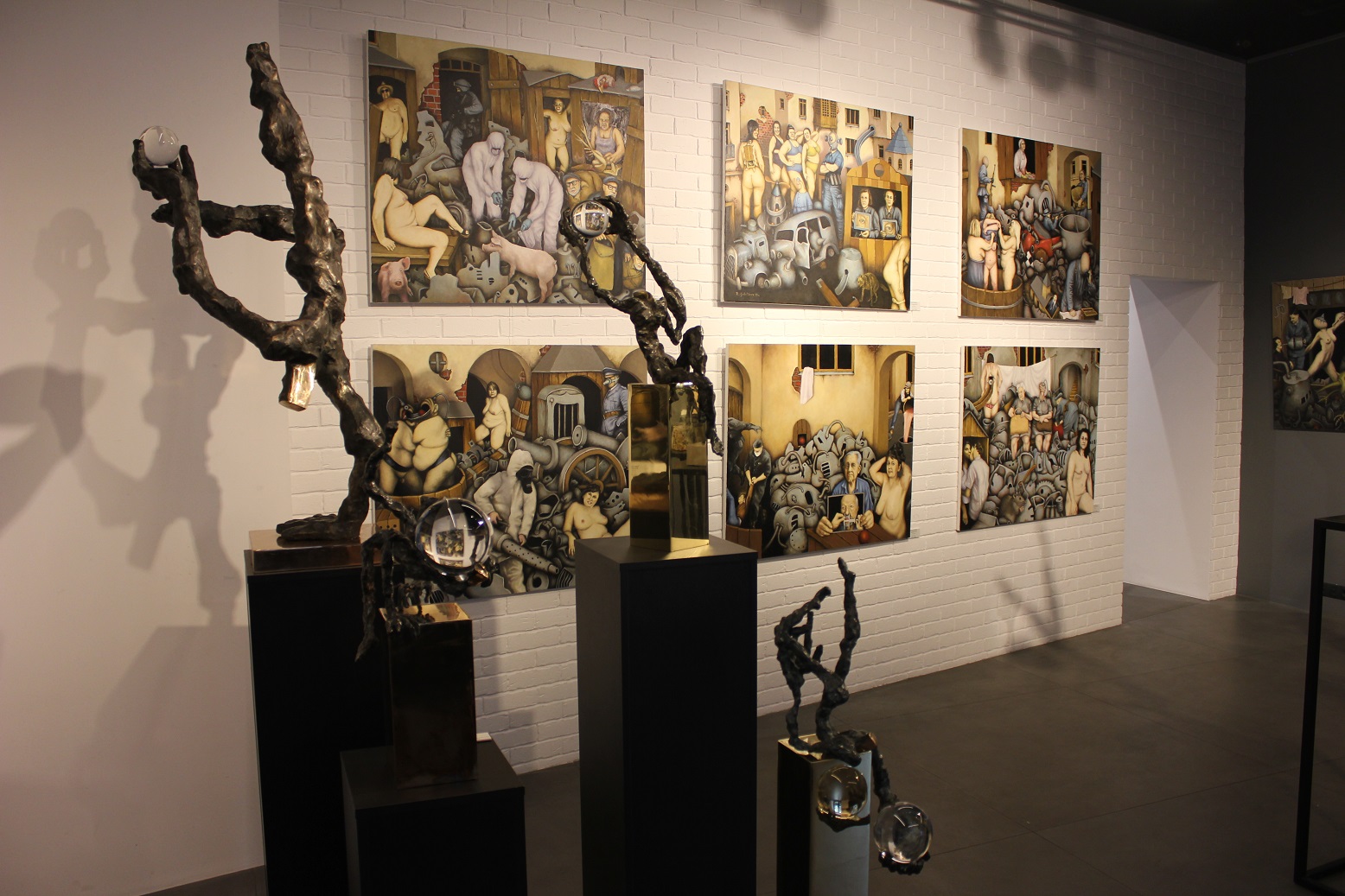 Robert Gebethner's work is undoubtedly a highly original phenomenon that defies clear classification and is outside the mainstream of art. The artist's paintings are grotesque visions whose main source is his uninhibited imagination. It is not only about the realistic way of presenting the human body, far from the criteria of the generally accepted canon of beauty, but also about the existential character of this work. The presented figures are naked not only physically, but also spiritually. At the same time, the artist does not act as a moralizer. His art does not try to negate certain human behaviours. It is also not a literal illustration of certain groups or deviations from accepted social norms. Gebethner himself is often the hero of his paintings, becoming an element of the complicated puzzle of the plot of these works. There is no boundary between conventional motifs, functioning in people's cultural consciousness, and everyday sights passed by on the street. Religious and historical scenes take place next to ordinary ones - in a crowd of people in a courtyard, in places that could be practically anywhere. The artist is not afraid to reach for these motifs and play with them using a consciously constructed metaphor. These unobvious connections cannot exist in the real world, but they are brought to life by art. They evoke extreme feelings in the viewer - through their ironic character they can entertain. On the other hand, they are often in a social context, which in a sense disturbs, and certainly forces reflection. It is not only about the combination of specific scenes, but also about the juxtaposition of realistic figures with strange creations of animal and human silhouettes, often combined with the surrounding background elements, which is characteristic of the grotesque. The multitude of motifs appearing in Robert Gebethner's works is a deep subject. He often returns to certain themes, searching for the best forms of presentation for them. These images can sometimes be shocking, but this is not an aim in itself, merely a starting point for a deeper reflection on human existence. In the paintings there is a certain splendour, a multitude of matters, things, phenomena and figures. The main motif of each painting is never given directly. It is sometimes obscured, placed somewhere in the background or even completely hidden. It is only as an element of a wider whole that it acquires a new meaning, regardless of whether these are human emotions, often overlooked at first glance; dead things, forgotten amidst a multitude of more or less important human affairs; or a record of a moment, visible only to a particularly attentive viewer. Tomasz Koclęga has been consistently searching for new forms of figurative art for years. He is inspired by the observation of other human beings - focusing not on analyzing the external features of an individual but on human behaviour, emotions and desires. Through characteristic deformation and dynamic composition, the artist manages to create works in a specific, recognizable style. The sculptures are never static. The figures are in constant motion. Additional dynamism is also added by the way the surface itself is worked out. The flat-convex vibrating texture which creates a play of light and shadow almost make you feel the power of tense muscles. This is a story about the lonely struggle of an individual in pursuit of a goal. The figures are moving upwards, and although the aim is not to realistically reflect the features of the human body, in the tense limbs and sometimes even unnatural poses one can feel the effort put into the action. The simplifications used by the artist make the characters universal. There is nothing to suggest their age or gender. The heads deprived of faces make us focus only on the general expression of the sculpture, the sculpture which is a metaphor of human psychic condition and human aspirations. It is in the pose and gesture that the core of meaning is contained. Tomasz Koclêga perfectly manages to use the universal language of art. Through his sculptures, the artist tells stories about man, his weaknesses, worries, fears, and strengths. The limp, elongated bodies, the vertical composition, the contrast between the imperfect human silhouette and the smooth glass surface, as well as the fact that these figures always appear alone, are symbols of the eternal inner struggle of the individual striving to achieve his or her goals.

The selection of new sculptures presented at the exhibition is united by a common denominator - a glass sphere. Sculptures with this attribute, with a very capacious and at the same time universal and widely understood symbolic meaning, are a continuation of my previous works, where I juxtapose my figurative forms with elements from other materials. The juxtaposition of bronze sculptures with glass, gold or stone, together with dynamic composition, is characteristic of my works. Perfect shapes such as spheres, circles and cubes inspire me in two ways. First, I see in them some analogies with humans, but not literally... I am thinking of the human quest for perfection as a kind of state of mind.... the need to develop and try to realize it. On the other hand, we are only human, the ideal if we manage to achieve it, it does not last forever... On the other hand, ideal shapes interest me as a form, especially when juxtaposed with the form of human bodies. In the latter case, they interest me as the opposite of human forms. My sculptures are twisted, take unnatural poses, are exaggerated and sometimes deformed. However, I always try to make them unique, unrepeatable... no work is a copy of another... In a collision with a sphere or a circle, apart from the symbolism of them, it also builds an interesting relation of forms. Human, individual, unique - sometimes maybe even flawed versus perfect, perfect form... 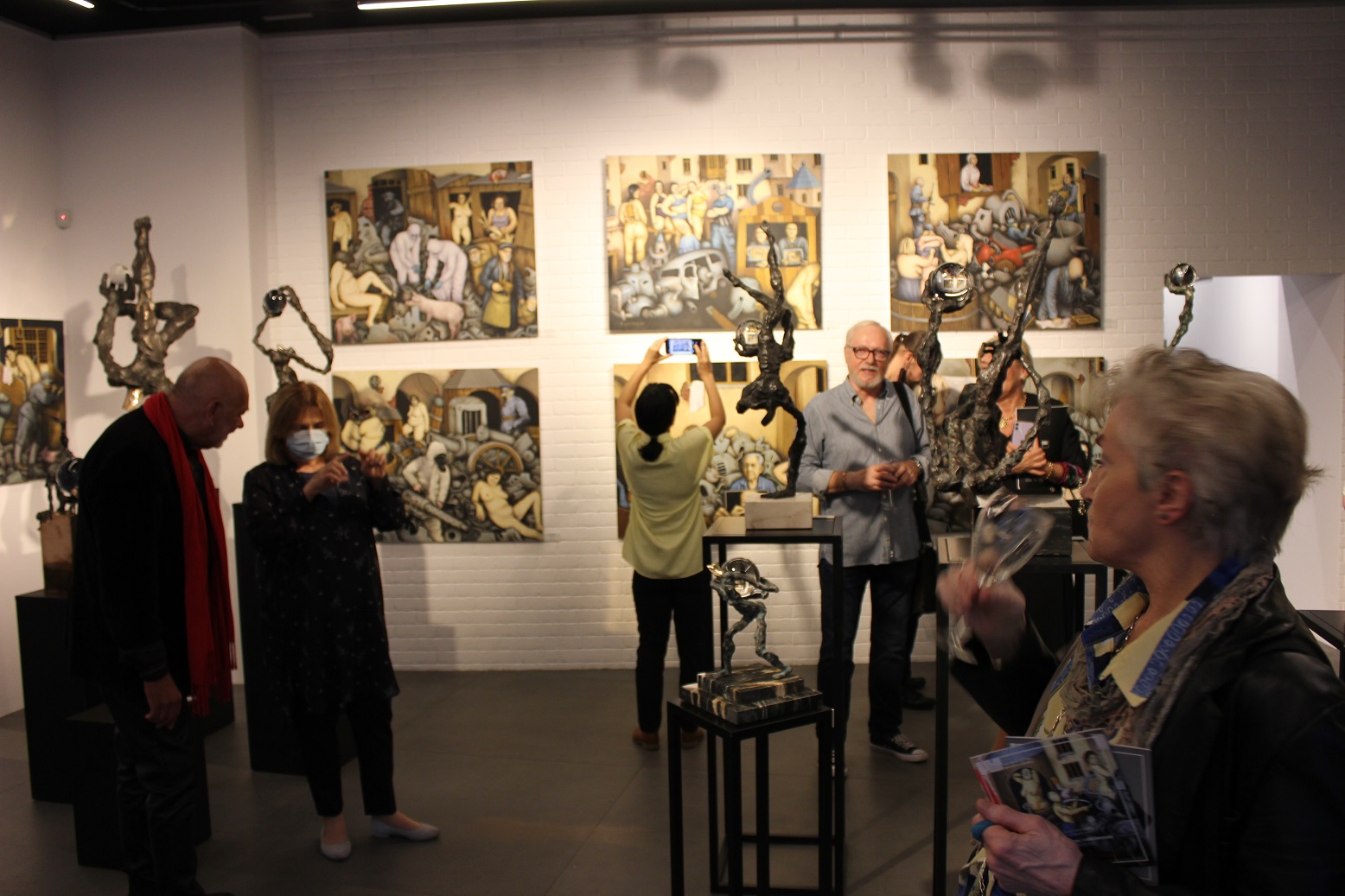 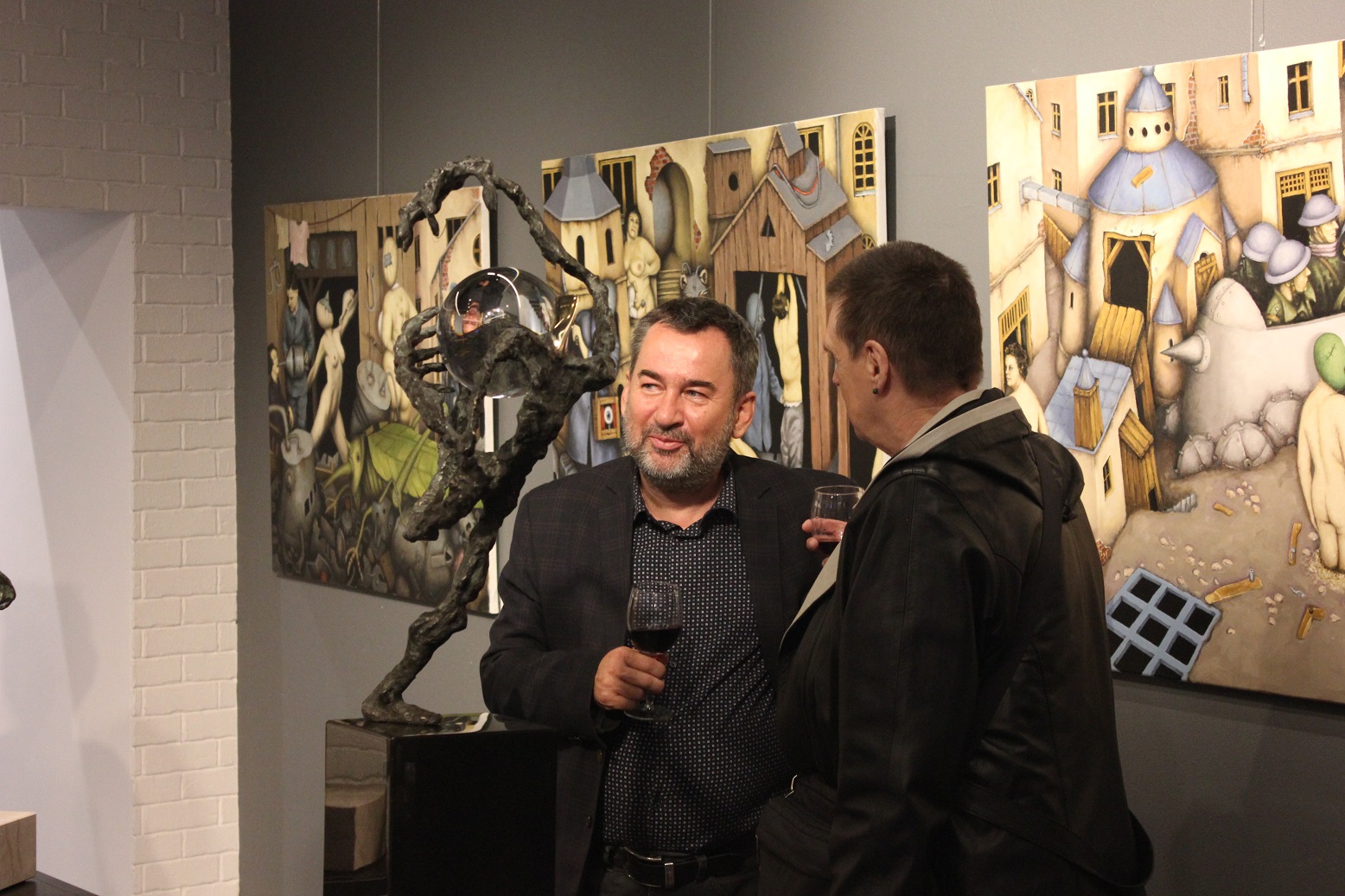